This antique Chinese Benjarong porcelain teacup and bowl blew the lid off its $50/100 estimate, selling for $17,400, the highest price at auction.

“It was a good bustling gallery,” said Errol Farr, co-owner of Old Kinderhook. “Sales seem to be returning to more in-person footfall, which I think is healthy for the market and more enjoyable for shoppers.”

The first day of the first sale had a strong display of fine art, especially paintings. The first four lots all fell into this category, each depicting landscapes with varying subjects. The first was Aaron Harry Gorson’s “Pittsburg Harbor” which sold for $5,520. Gorson was born in Lithuania in 1872, then known as Kovno and part of the Russian Empire, and emigrated to the United States in 1888, later studying at the Pennsylvania Academy of Fine Arts and the School of Fine Arts. His dark and brooding works are in the collections of many prominent American institutions, and this painting was sold to a Gorson collector to join several of his other works.

The second highest lot was more bucolic and abstract, its subject matter being more about what was not depicted than what was. As written in the auction catalog, “Outside” by Alain Senez »[depicts] trees lining the water where a girl’s white dress hangs haphazardly, its blue silk ribbon lies soft and almost translucent in the sun, but the former wearer is nowhere to be found, but is yet to be caught unprepared…”The mystery continues with a new owner for multiples of its high estimate at $3,600.

The sale in his estimate was “Seaside Village” by William C. Grauer for $1,860. Born in Philadelphia, Grauer graduated from the Pennsylvania Museum School of Industrial Art in 1914, then served in World War I until the end of the conflict. He then moved to Cleveland in 1927, married artist Natalie Enyon (1888-1955), and worked as a painter, muralist, and art teacher for 60 years. This painting shows a tranquil town lit by a patch of sunlight, contrasting with the dark sky beyond. 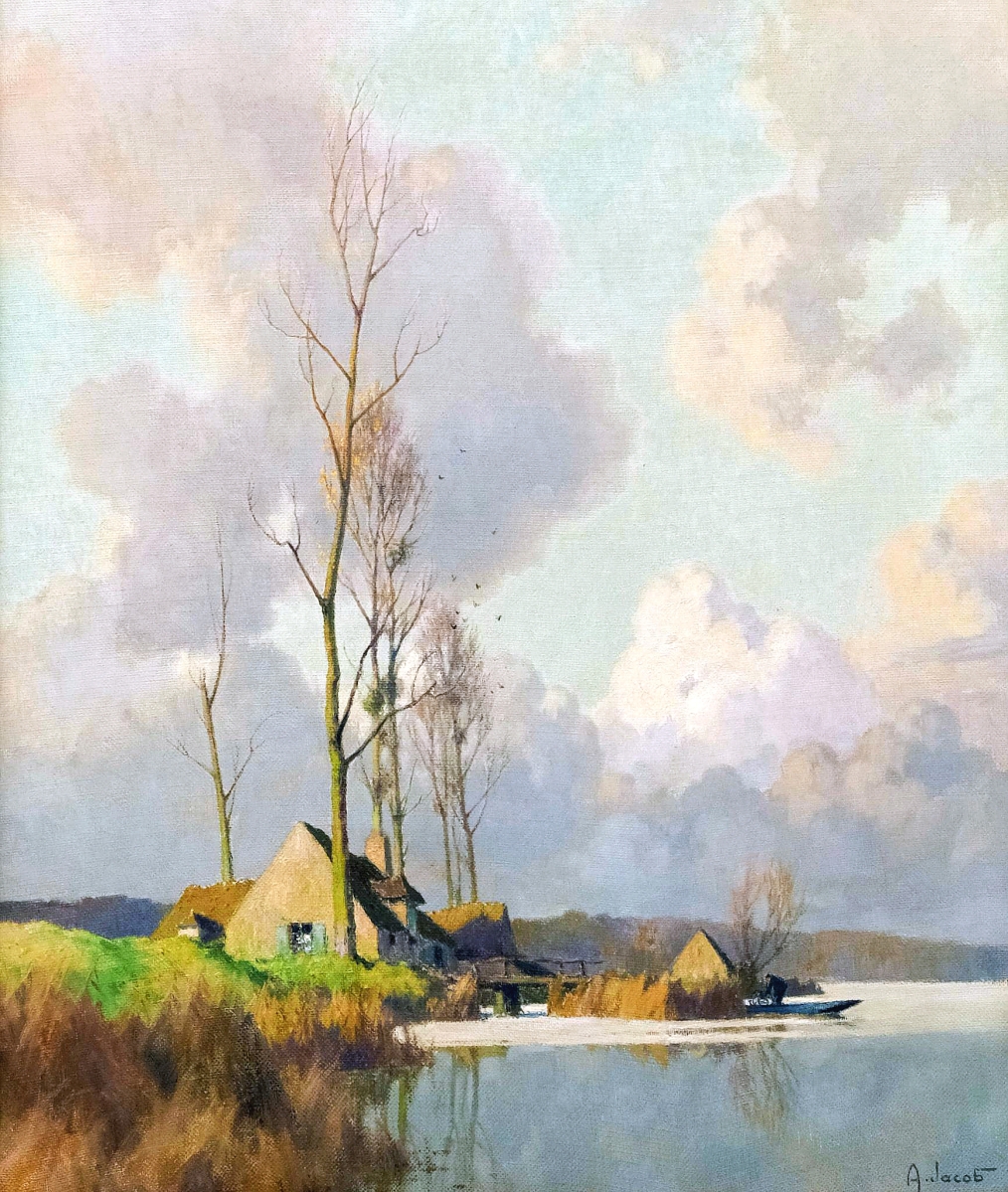 On par with this lot in terms of price was “Autumn” by Alexandre Jacob, however, this canvas went from a much lower estimate of $400/600 to $1,860. Jacob also studied at the École des Beaux-Arts and was known for his technique of dry brush painting with oil pigments to achieve a soft, atmospheric effect on his landscapes.

The second day sale was more focused on decorative arts, with more than one surprise in its best lots. The highest auction price was also won by a bundled lot with the lowest estimate, including an antique Chinese Benjarong porcelain lidded bowl and a Japanese teacup. Estimated at only $50/$100, the pair sold for $17,400. Benjarong porcelain is given as a gift on special occasions such as a wedding or New Year’s Day, and the bowl featured overglazed decorations of mythological figures, medallions and a revolving finial.

The next two batches were large, colorful rugs that far exceeded their estimates. The first was a room-sized Herat rug from the South Khorasan province of Iran, showing the famous “Herati” pattern of two leaves around a flower. Far exceeding its estimate of $200/300, the rug sold to an online bidder for $4,375. Next was a Lenkoran Kazak Caucasian long rug in exceptional condition, which more than doubled its high estimate at $3,480. “All of these rugs stay in the US,” Farr commented, “but have gone to high-end decorators. We’re starting to be known for our rug sales, as well as our artwork and frames. With right too!

Prices shown with buyer’s premium as reported by the auction house. For information, www.oldkinderhookauction.com or 518-912-4747.