Top lot, record price. Reaching $1,434,000, William Herbert Dunton’s ‘Treed’ not only left its $400/600,000 estimate in the dust, but shattered the artist’s previous world auction record of at $881,000 since 2008. Dubbed an “outstanding example of wildlife and sports art depicting the American West,” it’s perhaps no surprise that it’s now the world record holder for the artist.

RENO, NEV. – Coeur d’Alene Art Auction’s (CDAA) annual ‘Best of the West’ sale was dubbed July 23, when over 94% of the 337 lots on offer were successfully traded and the sale reached a sizable total of $16.4 million. Nearly 400 bidders at the Grand Sierra Resort took part in the blockbuster, who joined telephone and absentee bidders to compete against another 400 competitors online. Several world auction records were set for artists represented individually or in multiple lots, with more than 30 works fetching six-figure prices.

Mike Overby, one of CDAA’s partners, said they “felt good after the sale. It was one of our best sellers after five or six years. He noted that the sale was comparable in size to previous sales and that the sale welcomed new competitors, including a slightly younger demographic of bidders. While the auction house has welcomed European buyers for some time, Overby was pleased to see that the sale was attended by buyers from Australia and Taiwan. 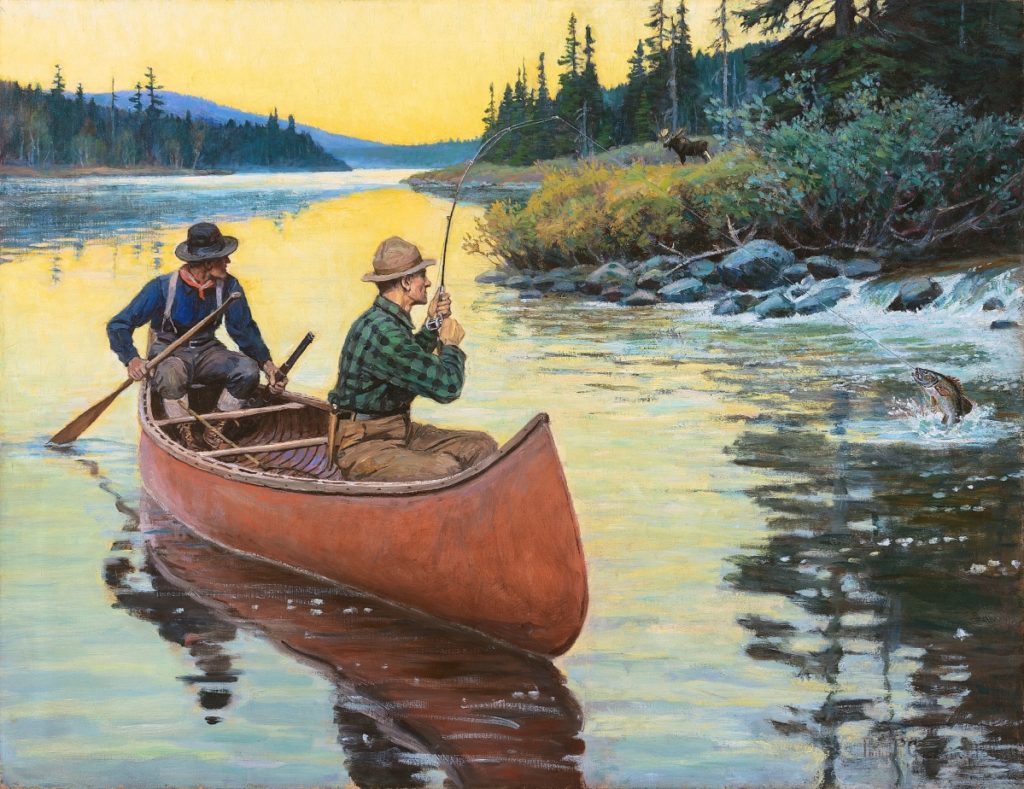 Achieving the second-highest result of the sale and setting a new world auction record for artist Philip R. Goodwin was “Between the Devil and the Deep Blue Sea”, which more than doubled the previous record and sold at one of CDAA’s top collectors, bidding in the room, for $968,000 ($150/250,000).

Art historian Michael R. Grauer, who will include ‘Treed’ in his forthcoming catalog raisonné on the artist, said of the work: “‘Treed’ is an excellent example of Dunton’s hunting paintings. created while he still maintained his ties to Boston and New York publishers such as Forbes Lithograph Manufacturing Company…[It] is an outstanding example of wildlife and sports art depicting the American West. This painting would make an exceptional addition to any collection of American Western art or wildlife and sports art, or both. The link between Dunton and Forbes Lithograph Mfg. Co. is significant because “Treed” had been owned by the company prior to its acquisition by a private collector in Andover, Mass., which was listed among its provenance.

“Treed” was one of five works in Dunton’s sale; next in value to “Treed” was “Crest of the Ridge, Grizzly”, which exceeded its estimate to finish at $453,750. Produced in oil on panel in a small 8 by 10 inch format, “Crest of the Ridge, Grizzly” had been included in two museum exhibitions and will also appear in Dunton’s forthcoming catalog raisonné. According to Dunton’s biographer, Julie Schimmel, “In Dunton’s wildlife art, the one subject that always dominated the pictorial space was the bear. The bear had been a subject dear to Dunton since childhood.

Another artist for whom the sale raised the bar was Philip R. Goodwin (1881-1935), whose “Between the Devil and the Deep Blue Sea” rolled up for $968,000, from a longtime collector of the CDAA bidding in the room. . Considered one of Goodwin’s most important paintings to ever come to market and coming from a private collection where it had resided for more than 80 years, the result more than doubled the artist’s previous record, which had been established by SADC in July 2021. Measuring 30 inches by 39 inches and depicting two sportsmen in a canoe, the title refers to the dilemma faced by the man from behind, who must choose between helping his companion bring in the trophy fish or shoot bull moose in the background. 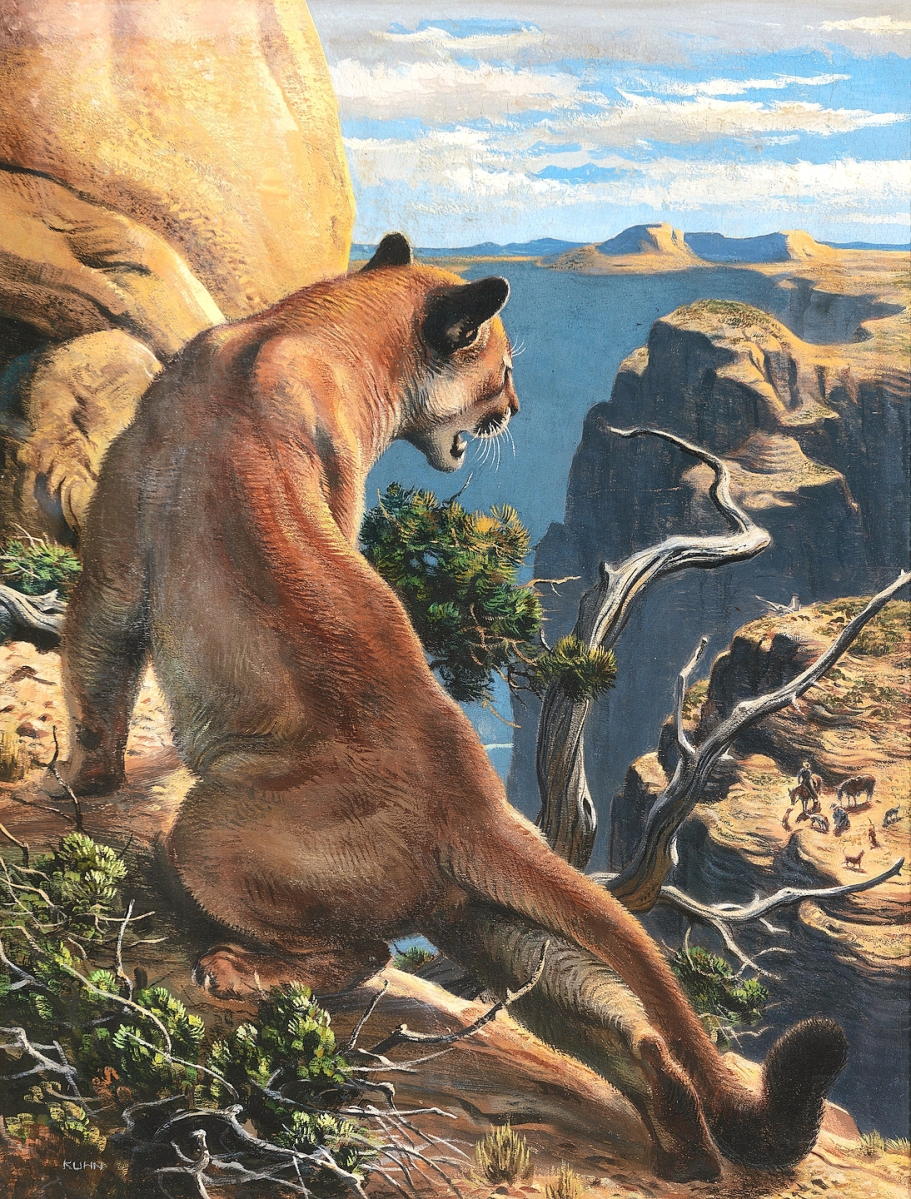 Goodwin’s biographer Dr. Larry Len Peterson said the painting was “a stellar example of why Goodwin has been recognized as America’s sporting artist for over 100 years”, further noting that Goodwin was invited by Jack London to illustrate The Call of the Wild in 1903. A few years later, Theodore Roosevelt, the world’s most famous hunter, commissioned Goodwin to illustrate his African Game Trails.

Perennial darling of the Western art market Charles M. Russell (1864-1926) was well represented at the sale with nine works, two of which placed third and fourth in the ranking; his works have grossed a total of over $2.1 million. Securing third place at $847,000 was “Shooting the Buffalo,” an early 1892 work that perfectly captured not only the nostalgia of the American West, but also the moment of judgment by not revealing whether the buffalo or the hunter had perished. CDAA’s catalog reads, “Early works such as ‘Shooting the Buffalo’ anticipated Russell’s rise over the next 30 years to become the most beloved and famous Western entertainer.”

Winning $544,500 against an estimate of $400/600,000, and a fourth place finish, was Russell’s “Mexican Vaqueros Roping a Steer”, which was painted in watercolor on paper measuring 18 by 28 inches. The subject was first introduced to Russell in 1906, when he and his wife spent several weeks in Mexico completing a series of studies of the Mexican cowboy for the sporting and outdoor magazine, Exit. During their trip, an exhibition of Russell’s work was held at the Porter Hotel in Mexico City. Coverage of the exhibition in the Mexico City Daily Record was quoted: “The art exhibit at the Porter Hotel this morning was as refreshing as dawn itself…. Mr. Russell’s work is difficult to describe. Language faintly describes the exquisite touch of his magic brush and pen, or the wonderful details of his art. During their visit, the Russells were invited to Mexico’s largest ranch, located outside of Chihuahua and owned by a Señor Terrazas. Several paintings resulted from studies painted on this trip, possibly even “Mexican Vaqueros Roping a Steer”.

Another artist with several works in the sale was Edgar Payne (1883-1947), who, with ten works on offer, gave bidders several options to pursue. Although Payne frequently depicted the Navajo reservation and the Canyon de Chelly, the circa 1916-1919 view of the “Canyon de Chelly” offered by CDAA was unique in that it included an Anasazi dwelling in the background, seen cut away in the vermilion cliffs. Estimated at $150/250,000, it sold to a telephone bidder for $484,000, the third highest reported price ever realized for a work by the artist at auction. Payne’s ten works found buyers at the sale, bringing home nearly $1.4 million. 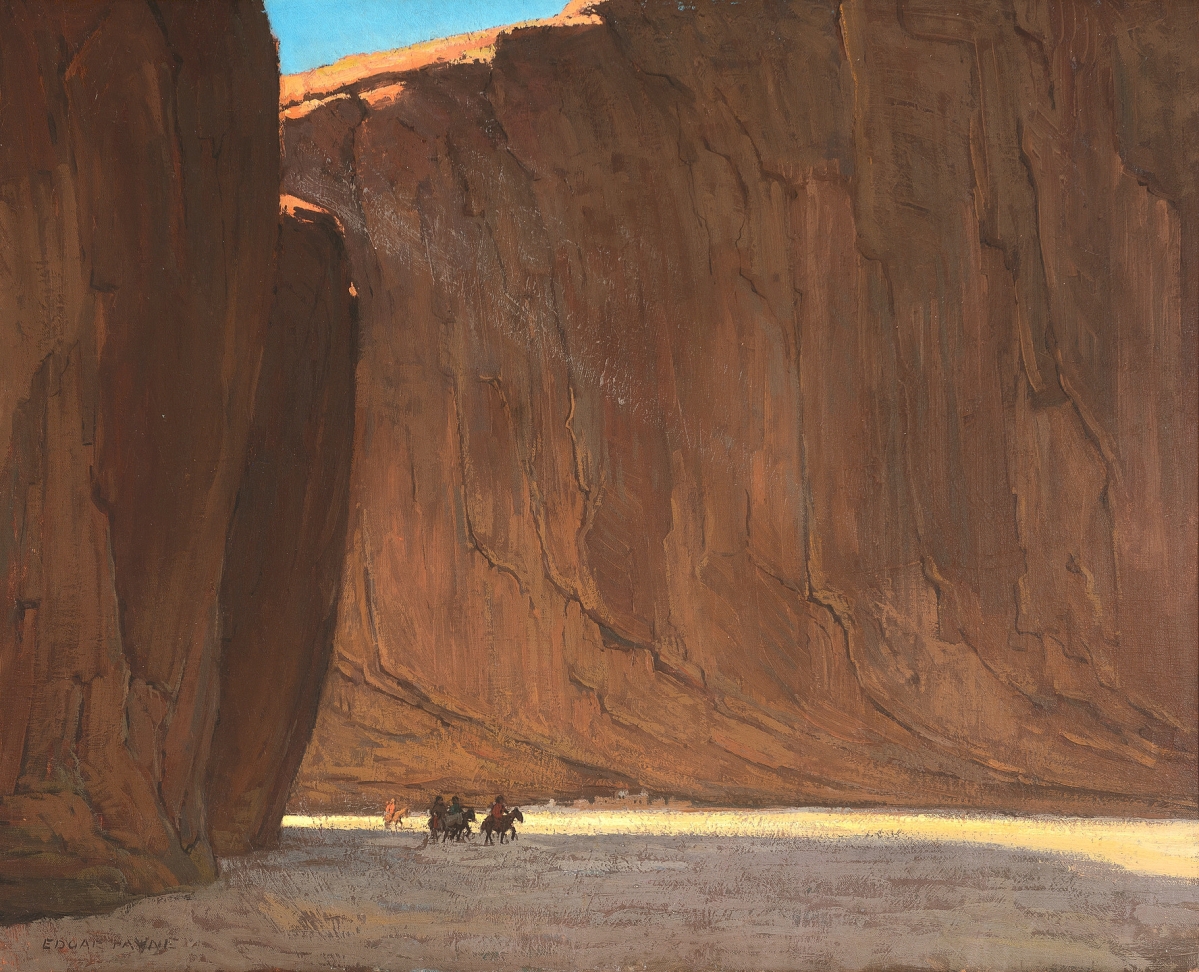 A frequent subject of Edgar Payne, this view of “Canyon de Chelly” was unique in that it included an Anasazi dwelling in the background. A telephone bidder took it home for $484,000, the third-highest auction result on record for the artist ($150/$250,000).

The same price of $484,000 was enough to string “The Lost Greenhorn” by Alfred Jacob Miller (1810-1874), which was on the market for the first time after 50 years in a private collection. The 18 x 24 inch oil on canvas is included in Alfred Jacob Miller’s catalog raisonné and has been described by Western art historian Ron Tyler as personifying [the career of the artist], who painted it on his first and only expedition to the Rockies. The subject was one that Miller painted in several views, but this particular painting had previously been loaned to the US Treasury Department, where it had been seen long term.

Coeur d’Alene Art Auction will hold an online sale in November and a two-day “March in Montana” auction in March; the company’s annual big western auction will take place in July.

Prices shown include the buyer’s premium as reported by the auction house. For information, www.cdaartauction.com or 208-772-9009.