Fine arts in furniture: the woodworking of Laura Kishimoto

It is easy to create a false dichotomy between fine art and design, between form and function or even between art and science. But for the Denver-based furniture and object designer Laura Kishimotoit is the intersection and overlap of these worlds that allows her to create her pieces that are bold, dramatic and beautifully organic.

“I’m always on the lookout for something that looks like it could have popped up out of nowhere,” she says, “so it doesn’t necessarily look like it was made, [but that] it has just formed. This is certainly the case for his iconic “Yumi chair“, which is now part of the permanent collection of the Denver Art Museumof the recently renovated Martin building.

Kishimoto’s journey to becoming a furniture designer has been just as organic as his creative process – unfolding gradually, naturally and not without its own challenges. Growing up outside of Boston in a family of scientists, she always thought she’d go to school for something more “certain”. But her creativity was undeniable from an early age and was recognized by her father, a microbiologist with an interest in photography and carving. As a first-generation Japanese-American, he embodied Samuel Adams’ quote that “I must study politics and war so that my sons may have the freedom to study math and philosophy.”

She attended the Rhode Island School of Design, which gives students the opportunity to explore drafting as well as 2D and 3D design during their freshman year. Although she had a talent for drawing, Kishimoto remembers feeling a little restricted in having to keep everything in one view. “When I walked in, it was the first time I was exposed to a three-dimensional work,” she says. “And for me, because you kind of see each point of view as a new composition of the object, it was easier to work more abstractly and not so literally.”

She remembers that one of her first projects was a small balsa wood sculpture that formed a perfect square, but only seen from above. “My teacher was like, ‘That’s the intention!'” Kishimoto recalled. “I’ve always thought about being very open. It was the first time I realized that your intention as an artist doesn’t have to be the interpretation people get from the object.

She considered the pursuit of sculpture her specialty, but felt that whenever she tried to do something purely sculptural, she lost her focus. When it found its way into woodworking, furniture design established itself as the perfect balance between individual artistic expression and the use of rigid technical skills.

This approach allowed Kishimoto to explore the balance between design and fine art. She believes that good design is intuitive and that through interaction you should be able to understand how an object is supposed to work. Fine art, on the other hand, is more emotional; it’s about inspiring someone to create their own narrative and build a relationship with the object. “But they overlap a lot,” she adds. “Even my dad would say there’s a lot of art and design in science. You can’t just be rigid or it would never progress.

“I also believe that you should always play to your strengths. And my strengths have never been making a comfortable chair. My very first woodworking project was a table that had this woven surface on top that was concave, and you put something on the table and it would roll in the center and fall through,” she laughs. “I was mostly obsessed with that negative space that draws you in and creates a sense of dominance and directs where your eye should follow. It never even occurred to me that you would put things on the table.

This is just one of Kishimoto’s many creative explorations of the intersection between form and function. “It’s a work of art inspired by a painting,” she explains.

After getting her BFA, Laura traveled to Ireland for a year to work as an intern for one of her favorite designers, Studio Joseph Walsh. She worked alongside the makers in the workshop, honing her craftsmanship, technique and relationship to her materials. However, there wasn’t much overlap between designers and makers, and she found that design was a much bigger part of her identity than she had anticipated. “I felt like I couldn’t really show my strength while I was there,” she says.

Living in a remote town outside of Cork also presented other challenges. “It was considered the sunniest part of Ireland, which means it rains 300 days a year,” says Kishimoto. She struggled with her mental health and work-life balance, and among a team of all-male employees on the shop floor, she also realized how important it was to have female connections in her life. All of these factors brought her to Colorado, where she traded cold and rain for 300 days of sunshine, and was able to create her own schedule between working as a carpentry contractor, helping a friend with his contract work, and create their own custom work to put in shows.

She also began teaching in the carpentry shop at Red Rocks Community College, where she continues to teach today, and where she is able to use her position to empower her students in a traditionally male-dominated discipline. men. “You often have to give them permission to occupy space,” she notes. “They will be very nervous, doubting themselves and doubting their right to be there. You have to be like, ‘No, you’re supposed to be here! Go try this stuff! I know it’s scary, but go ahead and try it.

One of his first spec parts after moving to Colorado was “Yumi II chair“, a second rendition of the original prototype she created at RISD. It went to a show in Philadelphia called Making a Seat at the Table: Women Transforming Woodworking, which was the first women-only woodworking show since the 1970s. or had heard of them or had a distant connection to them,” she says. “But I was also constantly on the verge of crying all the time, just seeing how women had created various identities for themselves in woodworking. She recalls her experience in Ireland again: “Working in these predominantly male or predominantly white environments definitely made me embrace my identity a lot more.”

“Yumi Chair II” continued to be exhibited in New York, where it was purchased privately, and has since made its way to the Mint Museum in North Carolina, where it resides in the Craft + Design permanent collection. Kishimoto continued to show his work at various exhibitions across the country and in Denver, but one of the most memorable was at the Denver Art Museum. Design after dark, where she first met Darrin Alfred, curator of architecture and design at DAM. He had his eye on “Yumi Chair” since it was sold in New York, and in 2019 the museum asked him to create another one. 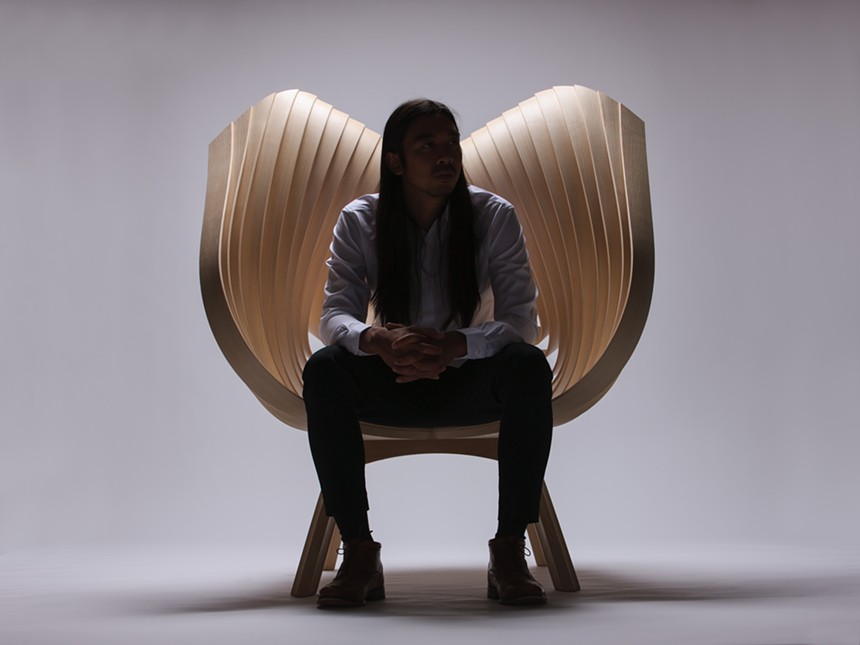 It may be art, but you can still sit in the “Yumi chair”.

It is the perfect example of the meeting of fine art and design – a work of art integrated into the human form. “I wanted to make it so big that when someone sat on it, it improved the design and kind of created a new element,” says Kishimoto. “It sort of makes you look like a vengeful death angel.” The chair she made for DAM is her fourth and final iteration, and she says it “is by far the best in terms of craftsmanship.” It is currently on display at DAM’s By Design: Stories and ideas behind the objects exposure.

“Often, I like to let my work speak for itself,” she concludes. “My job gives me a sense of empowerment. It makes me feel bold, unapologetic and over the top, although I wouldn’t call myself a bold person.