After a lengthy search for an assistant curator, Historic New England appointed Dr. Erica Lome to the position last March. Lomé hasn’t stopped working since graduating from the Bard Graduate Center in 2015, then moving on to the University of Delaware and earning her doctorate in 2020. She represents a new generation of professional scholars, slowly but surely filling the ranks around the world. antiques and the arts. Prior to historic New England, Lome was instrumental in relocating the Concord Museum’s new permanent galleries, showcasing hundreds of artifacts from the battles of Lexington and Concord in the “Shot Heard Round The World” exhibit. She also curated the museum’s current exhibition, “Alive With Birds: William Brewster In Concord.” Lomé also specializes in neo-colonial furniture, with a particular focus on immigrant and African-American craftsmen. In April, Lome traveled to Kentucky in search of neo-colonial furniture by African-American master craftsman Milton Paul (1921-1988). A few days later, she was marching with the Minutemen at the Patriots’ Day reenactment. We asked about her experiences, her favorite pieces of furniture, and what’s next for Historic New England.

Congratulations on your new position as Associate Curator at Historic New England! Could you favor our readers with some highlights of your journey?

Thank you! I am thrilled to join Historic New England and work with colleagues I have long admired. I came to Historic New England after two years at the Concord Museum, where I was Peggy N. Gerry’s Associate Curator, a post sponsored by the Decorative Arts Trust. Prior to that, I earned my doctorate through the American Civilization program at the University of Delaware, during which I completed postgraduate fellowships at the Winterthur Museum, the Nemours Estate, and the Boston Furniture Archive. I have a Master of Arts in Decorative Arts, Design History and Material Culture from the Bard Graduate Center in New York and have also worked for the New-York Historical Society, Museum of Arts and Design and Bonhams.

I feel lucky to have had these rich and varied experiences; each has informed my practice as a historian and museum professional. 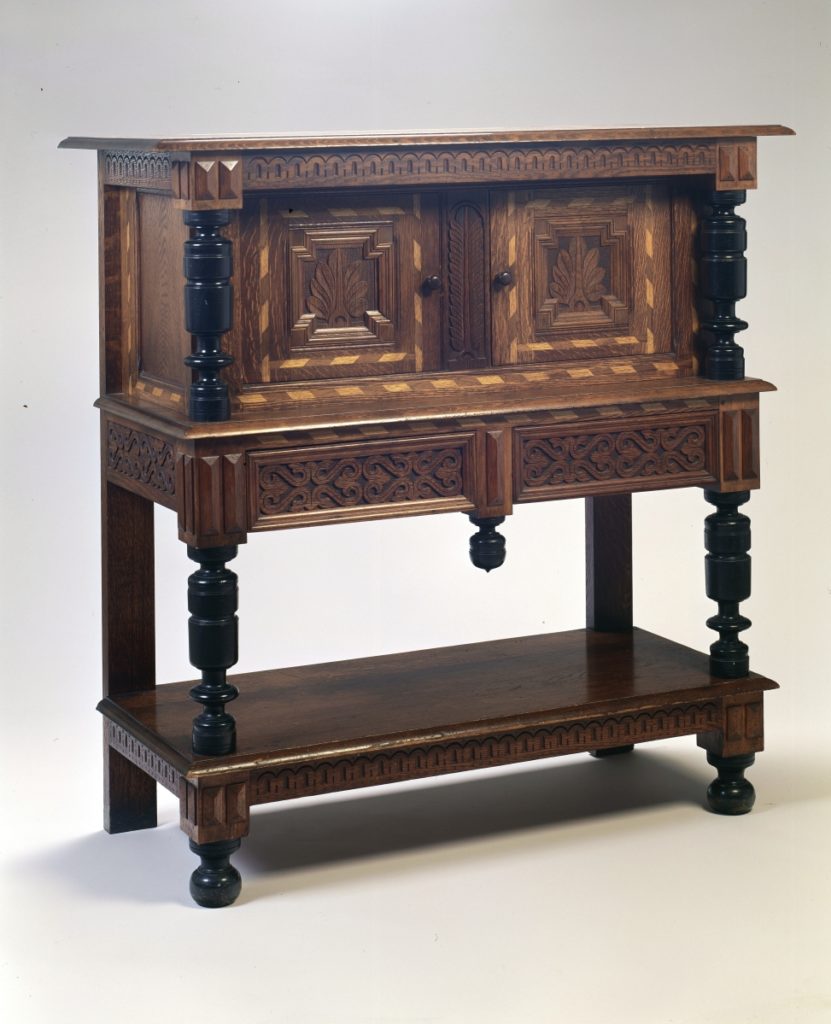 What first attracted you to the study of decorative arts and material culture?

When I was an undergrad, I worked as a seasonal interpreter at The Mount, The Edith Wharton Estate in Lenox, Mass. I had already enjoyed Wharton as a writer, but being in her home unlocked her for me as a person. The Mount was Wharton’s rebuttal to the established conventions of Gilded Age taste, as stated in his book The decoration of houses (1897), in which she advocated a return to classical proportions, symmetry and simplicity in design and architecture. Although Wharton only lived in The Mount for a short time, she imbued every inch of space with her passion and attention to detail. I witnessed how objects and space can become powerful interpretive tools in the hands of a skilled guide. I nurtured my interests in material culture and public humanities in school, and by the time I started my doctoral program at the University of Delaware, I knew I wanted to apply my academic training to humanize and make accessible individuals and subjects that, for many, reside in the distant past.

Your thesis was on neo-colonial furniture, tell us about your interest in this style.

My thesis was inspired by a very close situation: for decades, my parents were caretakers of my great-grandmother’s Colonial Revival furniture suite, which previously occupied her Upper West Side apartment in New York City. . My great grandparents were Jewish immigrants from Eastern Europe and acquiring these beautiful reproduction Chippendale and Hepplewhite furniture was a significant investment in their new mobile life. These pieces had such sentimental value to four families that my grandmother and mother couldn’t bear to let them go. I will eventually inherit these pieces, and hopefully by then I will have enough space to display them!

I was curious: why did these things matter so much to my family? What meanings did my great-grandmother and other newly born Americans derive from acquiring and displaying this style of furniture in their homes? Dubbed “heirlooms of tomorrow” for their perceived timelessness and durability, antique reproductions were highly successful commercial commodities and a staple of middle-class American interiors for much of the 20th century. But despite their ubiquity, surprisingly little research had been done to understand these objects on their own merits. My thesis therefore explores the production, promotion and consumption of neo-colonial furniture from 1890 to 1945.

Historic New England has been a fantastic resource for my research. As well as being historically rooted in the preservation movement, we have a fabulous collection of Colonial Revival furniture, ceramics, textiles and ephemera. I feel extremely fortunate to be able to share my passion for colonial revival – and all of its complexity – with our members and the public. 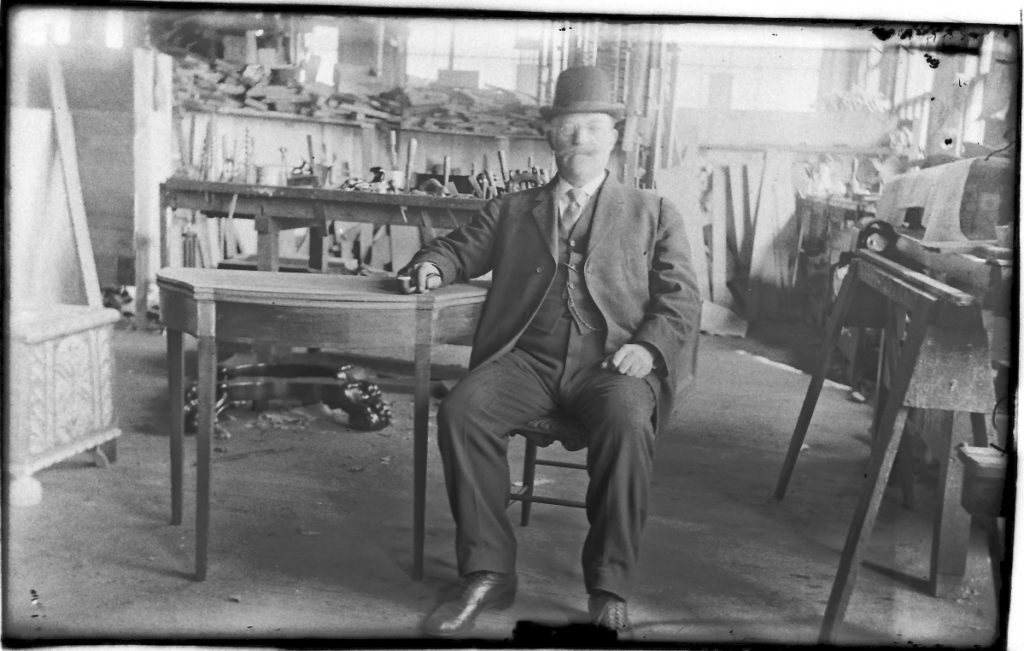 Photograph of Olof Althin (1859-1920) in his cabinetry in Boston.
Courtesy of the Althin family.

Another focus of your work has been immigrant artisans and their contribution to American material culture, what drew you to this subject?

I am fascinated by what happened “behind the scenes” of the neo-colonial movement, particularly in the trade of antiquities. At the end of the 19th century, the decline of the apprenticeship system and the rise of industrialized furniture making led to a decrease in the number of cabinet makers able to repair, restore and even reproduce antique furniture. European immigrants came to fill most of these roles and worked with collectors, dealers, and curators to establish the field of American decorative arts as we know it today.

While many of these cabinet makers were Jewish, a fact that first drew me to this subject, one of them was a Swedish-born carpenter named Olof Althin who ran a small but very successful cabinet shop. in Boston at the turn of the 20th century. Althin made custom furniture in various period styles, but he was also the contractor for notable antique collectors Charles Hitchcock Tyler and H. Eugene Bolles. Althin is most likely responsible for the restoration of the 17th century pieces by these two collectors on display today at the Museum of Fine Arts in Boston and the Metropolitan Museum of Art. By the end of his career, Althin claimed to know more about early American furniture than any dealer or appraiser!

Much to my delight, Althin left behind business documents, drawings, furniture, carpentry tools, personal effects, and even his workbench. I recently curated an exhibit of his work at the American Swedish Historical Museum, and am currently working on a companion monograph that explores his creative and industrious career in Boston.

Historic New England also offers many opportunities to engage with immigrant craft and labor in the early 20th century, and I look forward to promoting these stories as part of my new role in this organization?

What are the most memorable experiences you have had with an artifact or object?

During my research for my thesis, I came across an article from the NAACP magazine Crisis about Paul Laurence Dunbar High School in Lexington, Ky. Since the 1920s, Dunbar’s cabinetmaking program has trained young black people to make fine furniture by hand, preparing them for economic success within their communities. One of the graduates of this program was Milton Paul, who became a famous cabinetmaker in Lexington and was particularly famous for his Colonial Revival mirrors. These mirrors remain treasured heirlooms in Kentucky, but very little is known about Milton Paul himself.

I recently traveled to Lexington to dig into local history records and talk to past dealers and customers, as well as members of Paul’s family. I ended up learning so many things, including the fact that Milton Paul signed his mirrors by engraving a little “x” on the back of the frame. Indeed, some disreputable dealers had previously removed the paper backing with his handwritten signature and passed off the mirrors as genuine antiques. By carving this “x” into the frame, Paul ensured that his identity could not be erased in the future.

I had heard rumors that Milton Paul produced a reproduction mirror for a historic property in Lexington, but no one knew which one. I was determined to find him. With only one day left on my trip, I stopped at a house museum that had been renovated in the 1950s and saw a lovely neoclassical mirror in the entrance hall. I asked one of the interpreters if we could look at the back and, oh surprise, there was the “x”! I was so happy to make this attribution and share my research, especially since it has brought renewed attention to this local craftsman and the largest community of black cabinetmakers in town. 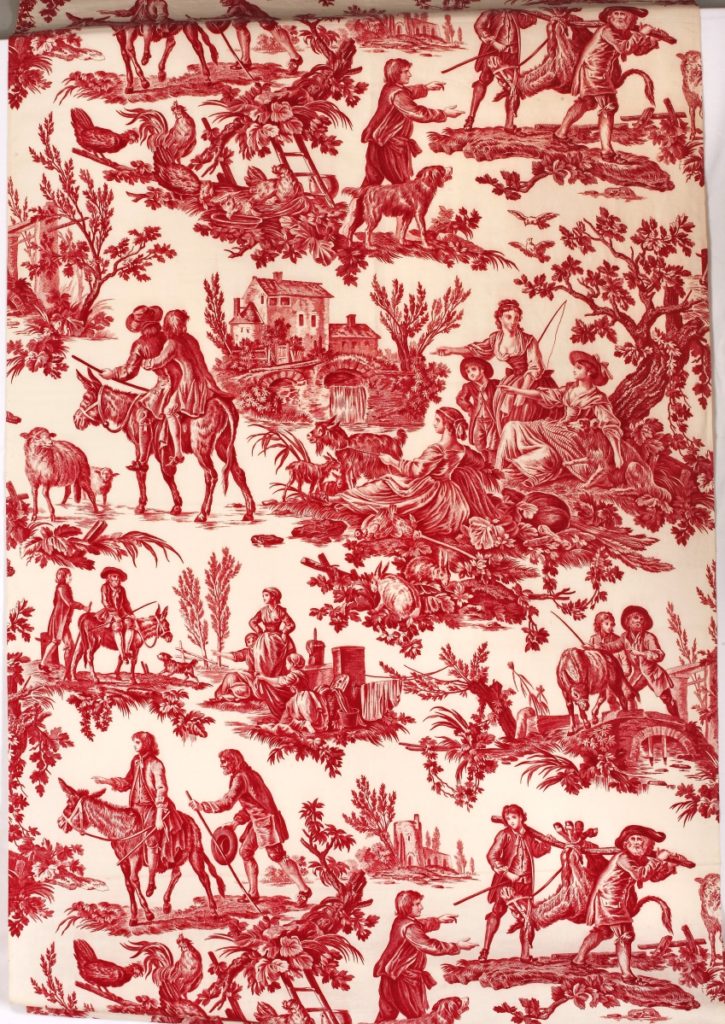 What can we expect from Historic New England’s next season, and can you share any broader designs for the organization beyond this year?

We have a new exhibit opening June 10th at the Eustis Estate in Milton, Mass. called “Loud, Naked & in Three Colours: The History of Tattooing in Boston”. As America’s factory towns filled with entertainment-hungry workers, enterprising men and women discovered how to make a living in the tattoo business. This exhibition explores this phenomenon through a selection of flash art, photographs and advertisements and tells the stories of the city’s major tattoo pioneers.

We also recently launched ‘Recovering New England’s Voices’, a multi-year, multi-phase project to reinvent our sites by seeking out new, inclusive stories and sharing them through authentic and innovative storytelling. A key part of my job is to help expand and refine our collections, and we work with local community leaders, artists, scholars and organizations across the region to better represent the diversity of the New -England. I am proud to be part of this exciting and important undertaking, which will ultimately transform the way we understand and interpret the history of our region.

Previous I haven’t bought a single piece of furniture this year
Next Antiques Roadshow’s Ronnie Archer-Morgan: Growing up in care saved my life