Retail sales fell further in May as shoppers cut spending on everything from food to furniture as the cost of living crisis raged.

With rising April bills swallowing up a much larger share of people’s incomes and rising food prices, the amount of goods Britons bought from retailers fell by 0.5% between April and may.

The Office of National Statistics said the drop in retail sales in the month came after sales in grocery stores fell 1.6%.

Supermarket sales were down 1.5% in the month, while specialty stores like butchers and bakers were down 2.2%.

Rising shop prices, especially for groceries, mean 44% of Britons said they bought less food in the past two weeks, up from 41% in the previous fortnight and 18% at the start of the year.

Heather Bovill, Deputy Director of Surveys and Economic Indicators at the ONS, said: “Reports from supermarkets suggest customers are spending less on their grocery store due to the rising cost of living.

“These increases were offset by declines for housewares and department stores, with retailers in these areas reporting consumer reluctance to spend due to affordability concerns and higher prices.”

Supermarket giant Asda said earlier this week that some shoppers are asking cashiers to stop scanning items when the till total hits £30 to cut costs.

Shoppers are also swapping branded items for cheaper own-brand alternatives, as food inflation hit 8.3% this month, adding £380 to the average food bill, according to Kantar figures released this month. week.

And official figures on Wednesday showed inflation hit a new 40-year high of 9.1% and there are fears a sharp drop in consumer spending could tip the UK into recession. 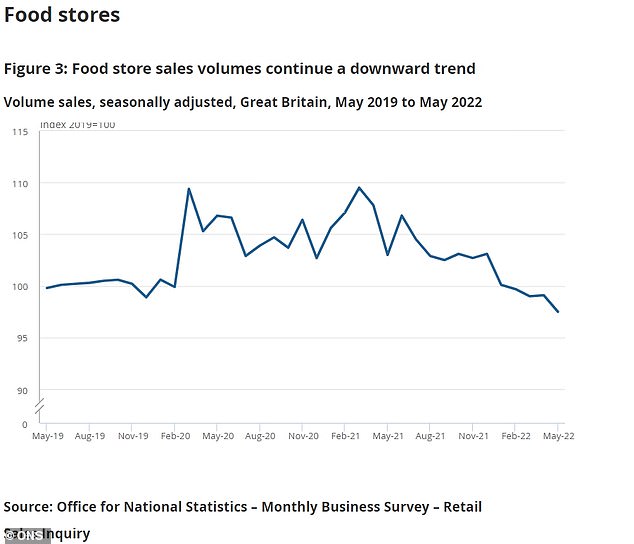 The drop in retail sales during the month came after food store sales fell 1.6%

Despite falling sales – with the ONS also reporting a 4.7% drop from a year ago – people are still spending more.

The value of retail purchases increased 5% from a year ago and 0.6% in the month.

Sarah Coles, senior personal finance analyst at Hargreaves Lansdown, said that given inflation over the period was 9.1%, “this is clear evidence that we are cutting back”.

The biggest drop in spending was seen for alcohol and tobacco, with sales down 4% in May. 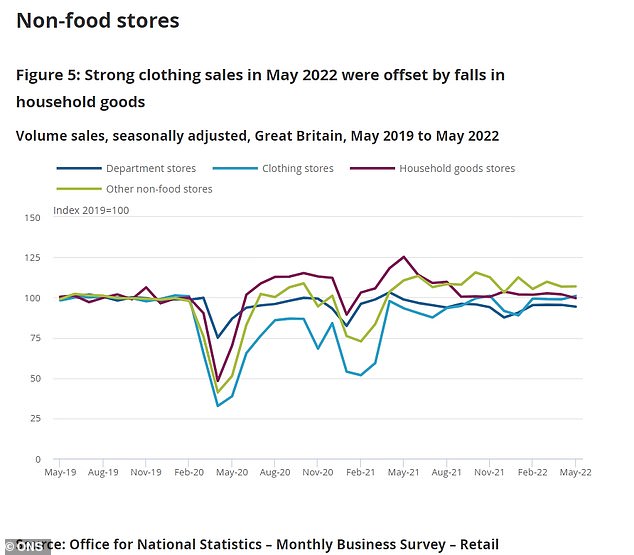 Only fuel and clothing sales have been up since April, up 1.1% and 2.2% respectively.

The ONS said the rise in fuel sales partly reflected more workers returning to the office, while shoppers refreshing their wardrobes ahead of their summer holidays helped boost sales clothing.

The proportion of online sales fell to 26.6% from 27.1% in April, with shoppers increasingly returning to stores, but the ONS said this remained “considerably higher than before the pandemic “.

Martin Beck, chief economic adviser to the EY ITEM club, said the retail sector was “effectively already in recession” and expects a marked slowdown in sales later this year.

“Taking a step back from the May data, it is clear that sales have been on a steady downward trend since peaking in April 2021 when the economy began to emerge from the last COVID-19 lockdown” , did he declare.

“In the first part of this period, the decline was largely a function of the return to social consumption at the expense of goods.

“But that process appears to have been largely completed in the early months of this year, and recent weakness is likely a function of the squeeze in household finances.”

Beck expects the second half of 2022 to be a “difficult period for retailers, with consumer purchasing power under significant pressure due to very high inflation and rising personal taxes. , and with a confidence that continues to decline”.

Purchasing power is already under pressure, with households around £42 less a week than last year, according to Asda’s latest income tracker.

Rising inflation has pushed up household spending on essentials such as fuel, groceries, energy bills, utilities, mortgages and rent, to £532 a week, an increase by 10.6% compared to last year, according to the report.

As a result, after paying taxes and essential bills, the average household had £202 a week of discretionary income to spare.

The report, compiled by the Center for Economics and Business Research (CEBR), also found that low-income households fared much worse, with their disposable income falling by more than 100% year-on-year. other.

This leaves them with a negative disposable income of £58, meaning their after-tax income did not cover essential living expenses.

He said 20% of households now had “negative discretionary income”, attributing it to the withdrawal of government benefits and the concentration of inflation on key spending areas.

Consumer confidence has fallen to its lowest level on record as a ‘brutal new economic reality’ hits households, figures show.

GfK’s long-running consumer confidence index fell one point to minus 41 in June, the lowest point since records began in 1974.

This means people are more pessimistic than during Covid or the financial crisis.

Confidence in their personal finances over the next 12 months, as well as in the general economic situation, has plummeted.

The major purchases index, a measure of confidence in buying big-ticket items, remained stable, but still in negative territory.

GfK’s Joe Staton said: “Consumer sentiment is currently gloomier than at the start of the Covid pandemic, following the 2016 Brexit referendum, and even the shock of the global financial crisis of 2008, and now we’re talking about an impending recession.

“One thing is certain, Britain is facing a new economic reality and history shows that consumers will not hesitate to entrench and tighten their purse strings when the going gets tough.”

“The impact of headwinds from inflation and rising prices is weighing on consumer demand for certain discretionary goods and businesses. But there are still tailwinds supporting spending elsewhere, in the form of high employment, pandemic savings levels and a desire for experience-based spending.

He said: “With consumer spending accounting for around 63% of UK GDP, the GfK index has been a closely watched recession forecaster in the past.”

“Economists warned in April and May, when the index fell to -38 and -40, that those levels were consistent with a sharp economic downturn ahead.”

Some links in this article may be affiliate links. If you click on it, we may earn a small commission. This helps us fund This Is Money and keep it free to use. We do not write articles to promote products. We do not allow any business relationship to affect our editorial independence.

Previous Half of Sunriver Restaurant’s Outdoor Furniture Disappeared After Fake Online Advertisement Says It’s Closing, Come Take It
Next What’s on the Guide: From Antiques Roadshow to Superheroes