Traveling exhibit in search of stories, art celebrating the heritage of the Hispanic community of Covington

Oscar L. Smith April 2, 2022 Few and far art Comments Off on Traveling exhibit in search of stories, art celebrating the heritage of the Hispanic community of Covington 15 Views

Just over two years after hosting a well-attended Latino picnic, the Behringer-Crawford Museum is hosting another event to connect with Covington’s thriving Hispanic community.

What’s being called the Hispanic Cultural Collaboration Project will culminate later this year in a traveling exhibit that showcases the stories, art and histories of local residents with Latino heritage – but for it to succeed, it needs attendees.

The idea is to educate others about Hispanic culture, stories and art, said Kim Gehring-Cook, director of education for Behringer-Crawford. To that end, the museum has appealed, via social media and other means, to the Hispanic community to ask them to participate — because this exhibit, she said, will be theirs.

“BCM wants to give the Hispanic community a platform and a voice where they can celebrate their heritage, tell their stories, and show other members of the community that everyone is more alike than they thought,” said Gehring-Cook.

The band Son del Caribe performed at the Behringer-Crawford Museum’s ‘Latin Picnic’ in 2019. (Photo by City of Covignton)

Covington has experienced notable growth in its Hispanic population and the number of Hispanic-owned businesses. A municipal outing released during National Hispanic Heritage Month talked about the growing community and its impact.

To engage these families – and in turn to draw the attention of the wider Covington community – the museum is looking for things like individual stories that speak to their experience of moving to another country, the traditions they brought with them and, if they choose to share, family stories and stories.

So far, only a few people have volunteered to participate in the BCM project, but he is working to get more.

The non-profit Esperanza Latino Center, which provides services and advocates for the Hispanic/Latino community from its Pike Street building, texted the 1,000 families in the community on its list to help BCM connect with volunteers.

And Michael Wesson, community learning center coordinator at John G. Carlisle Elementary, arranged for Gehring-Cook to meet with school students this summer for several sessions to create an art project.

“When students, especially at a young age, create artistic expression, it brings together head, hands and heart to create something they can look at with pride,” Wesson said. “Sharing these cultural experiences with the community enriches those of nearby culture and neighbors.”

Gehring-Cook said when museum staff realized a few years ago that BCM wasn’t reaching the Hispanic community, they enlisted the help of Leo Calderon, who helped start Esperanza and is part of of the BCM board of directors, as a liaison officer.

In September 2019, BCM hosted the first of what it hoped would become an annual Latino Picnic. It was a busy and festive event, but the COVID-19 pandemic prevented other events from happening.

There is now hope that the mobile exhibit – by highlighting the community’s experiences, what they love most about their culture and what they want to share with others about their heritage and of its history – will recreate this energy. 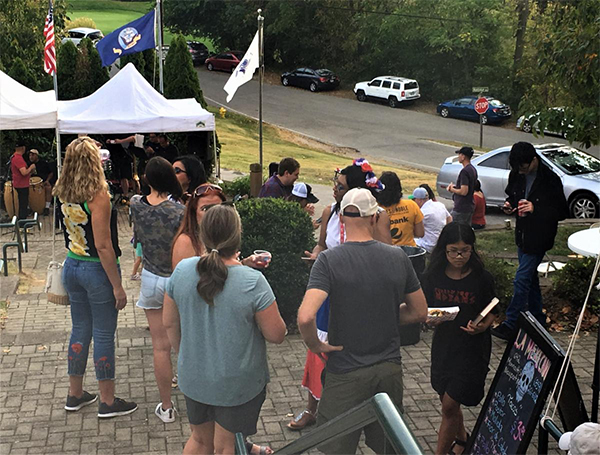 Residents attend the ‘Latin Picnic’ in 2019. (Photo by City of Covington)

“It will ultimately be curated by the Hispanic community, guided and facilitated by BCM staff, including bilingual interns to eliminate language barriers,” Gehring-Cook said of the exhibit.

“The exhibit will look like anything members of the Hispanic community, who donate their time to work on it, imagine,” she said.

Hispano-Latino art will play an important role in the exhibition.

“As we work with students at John G. Carlisle School on several occasions this summer, they will complete a Mexican mirror project based on hojalata (tin art) sold in markets,” Gehring said. Cook.

Ideally, the expo will launch more inclusive exhibits, Gehring-Cook said, referring to the Diverse Diamond Expo in 2021. That expo showcased the region’s connection to the National Negro League of Baseball, where some of the biggest Sports stars played during the era of racial segregation.

The partnership with John G. Carlisle Elementary and the Esperanza Center means volunteers won’t have to travel to BCM to help create the exhibit, as the school and resource center offered the use of their buildings. This is important since BCM – located in Devou Park at the western end of town – is not on a bus route. So, without a car, transportation to and from the museum is difficult.

Esperanza’s help in reaching families and individuals who use their resources also goes a long way to developing trusting relationships, Gehring-Cook said.

“BCM is working to strengthen our collaboration and partnership with the Esperanza Center to build trust with the Hispanic community,” she said. “We want children and families to be involved and feel comfortable and belong, not only in BCM, but also in communities across northern Kentucky.”

The Hispanic Culture Collaborative Project’s traveling exhibit will initially open at Behringer-Crawford, then travel to the Esperanza Latino Center and John G. Carlisle Elementary School. Gehring-Cook said they eventually hope to use libraries and other schools as hosts as well.

Gehring-Cook said the deadline to submit stories, artwork, artifacts and more for the exhibit has changed several times, but they are currently looking at the June 1 deadline. They hope to have the exhibit ready for the public by fall 2022.

The easiest way for volunteers to get involved with the project’s traveling exhibit is to contact Kim Gehring-Cook at [email protected], or call 859-491-4003, ext. 1004.

Previous Fraudster swindled vulnerable West London pensioners out of £267,000 antiques before flogging them on eBay
Next A book club organizes an Easter clothing drive